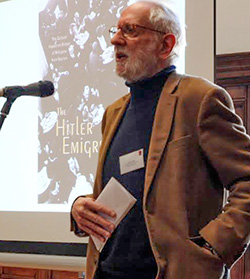 Daniel Snowman is a social and cultural historian. He was born in London, educated at Cambridge and Cornell, and at 24 was a Lecturer at the University of Sussex.

For many years, he worked at the BBC where he was responsible for a wide variety of radio series on cultural and historical topics.

Since 2004, Daniel has held a Senior Research Fellowship at the Institute of Historical Research (University of London) for whom he has given lectures, organised and chaired both academic and public Seminars and recorded a succession of interviews with leading fellow historians.

The Covent Garden piazza was the first great square in London. Created in the 1630s, its perimeters were decorated by a string of Italianate buildings – notably, on its western side, that self-consciously Palladian church, St Paul’s, by Inigo Jones. One of the most fashionable areas in town, the piazza soon sprouted every amenity a wealthy Stuart or Hanoverian household might require: coffee houses, a market for fresh fruit and vegetables (and elegant but discreet prostitutes), and in 1732, the first of three successive theatres on the square’s north-eastern borders. All this made for rich pickings by artists such as Hogarth and others.

Over the (nearly) four centuries since the piazza’s creation much was to change as the sights, sounds and skills on show shifted with the times. One theatre after another burned down only to be redesigned and rebuilt, while today’s market would be unrecognisable to earlier habitués from Swift and Dr Johnson to Shaw’s Eliza Doolittle. In 1872, Gustave Doré portrayed Covent Garden as little more than a dark and dangerous place of the night. Yet the Covent Garden piazza and the cultural life it has long embraced have continued to survive, indeed to thrive: a state of grace which would surely sometimes have seemed (to Eliza at least) ‘not bloody likely’

Art has often been stimulated by war, from the Iliad and Aenead to novels such as War and Peace, the poetry of Wilfred Owen, the visual images of Goya’s Horrors of War, Picasso’s Guernica, Henry Moore’s huddled masses and the sculpture of countless war memorials. Then there’s music. Upbeat anthems like the Marseillaise or choruses belting out “Guerra! Guerra!” in operas such as Aida – and the sadness of Nimrod every year at the Cenotaph.

With the 100th anniversary of the end of the First World War and the 80th of the outbreak of the Second, we examine the links between art and war across Europe over the past two centuries.  During the course of our artistic explorations, we encounter the triumphs and tragedies of Napoleonic times, visit mid-century Italy during its struggle for independence and learn how the arts portrayed the Crimean War, the regime of Napoleon III before and after he was toppled by the Franco-Prussian war, the Boer War and the two World Wars – both at the time and since.

This lecture places art in a powerfully resonant historical context. It is richly illustrated with imagery taken from throughout Europe, and it also draws upon the messages (sometimes disturbing, sometimes comforting) embodied in music, drama and literature and that most multimedia of art forms, opera.

The Gilded Stage: A Social and Cultural History of Opera

In Mozart’s day, who would have known who he was, and how? Why did the ‘prima donna’ get her fiery reputation? Which have been better for opera: dictatorships or democracies? Has opera ever been truly self-financing? When did opera audiences begin to turn up on time and remain quiet during performances? And how did a supposedly ‘elitist’ art form take root in such egalitarian societies as Australia and the USA?

These are some of the questions addressed in a richly illustrated Lecture about the history of an art form that incorporates all the others. From the birth of opera in late Renaissance Italy we move to Louis XIV’s Versailles, Handel’s London, Mozart’s Vienna, Verdi’s Italy, Wagner’s Germany, Gilded Age America and the world-wide spread of opera in the 20thC. The Lecture concentrates on the ‘demand’ rather than the ‘supply’, and considers eg: patronage of the arts, the changing nature of the operatic professions, opera and politics, theatrical architecture and stage design, and the impact of new technologies from gaslight to digital downloads. By the 21stC, opera had become truly global in its appeal. Yet, with the core repertoire seeming to slip into an ever-receding past and the world plunged into economc recession, the question must be addressed: does opera have a future?

Queen Victoria and Giuseppe Verdi died within a week of each other in January 1901, two octogenarians widely revered as the embodiments of their respective nations. They had much in common: Victoria loved music and opera, while Verdi cared deeply about the politics of Italian unification. Each achieved early celebrity, later ‘retiring’ from the public eye (thereby attracting some resentment) before becoming a national treasure once again in old age.

Both became encrusted in layers of mythology, during their lifetimes and thereafter, as British and Italians alike refashioned their past in the service of an ever-shifting present.  Drawing on a rich multiplicity of images, this Lecture examines the changing iconography of the two ‘V’s’ against the background of the wider cultural history of their respective nations.

What do these have in common?  The Penguin Pool at London Zoo; the Glyndebourne and Edinburgh Festivals; the art publishers Phaidon and Thames & Hudson; the cartoon character “Supermac”; The Buildings of England; the film The Red Shoes; the Amadeus Quartet.

Each was created by émigrés from Central Europe who, escaping the shadow of Nazism, found refuge in Britain.  Artists and architects, film makers and philosophers, musicians and publishers, historians, psychologists and scientists – all brought something of their continental legacy to Britain. Their collective talent was enormous and their influence far in excess of their numbers.  The Lecture is richly illustrated: a colourful and provocative introduction to the art and culture of our own lifetimes.

Highlights (in addition to over 650 lectures for ‘The Arts Society‘ – formerly ‘NADFAS’), have included 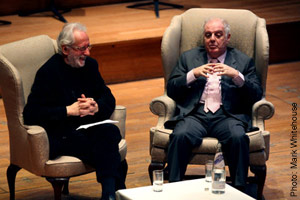 Interviewing Daniel Barenboim before an audience at the Royal Academy of Music, London

Later in 2022, to mark the centenary of the BBC, Daniel has a number of lectures scheduled, including for BBC Alumni, the Institute of Historical Research et alia.